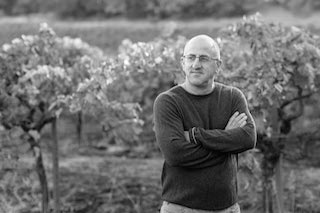 Napa Valley Cabernet is so often the go to wine for many wine aficionados. I have often been curious to the question of how/when a Cabernet producer like Screaming Eagle, Bryant Family, Harlan Estate, and so many others, move from entering the market place, to becoming a high demand, California Cult Wine.

Recently, I had the opportunity to talk with an assistant to one of the worlds most notable cult winemakers (Heidi Barrett), his name, Tony Arcudi. Arcudi, now producing a very limited production (around 250 cases) of his first wine released under the name, Arcudi.

After speaking with him over lunch, and tasting his Napa Valley Howell Mountain Cabernet, one would have to seriously consider..."Is this the next California Cult wine?"

A - "It was a pretty fast climb, but it was a battle to get there. I got caught in it like everyone does. At some point you get taken in with a wine that knocks your off your feet. I will never forget, I was in my late 20's I went to a dinner party and the host poured the wine and it was like everything went quite and I found myself in the corner, like, what is this?  I didn't sleep well that night. It was a Chateauneuf du pape. My curiosity got going, and I bought books, and tried making wine at home (in Boston)."

"I came to the realization, if I want to make better wine, I have got to get better grapes. I was always torn between the security of the paycheck and giving this a shot. I finally got the guts and started the process to get into Davis. After getting out of Davis I convinced Chapoutier as charity to take me as an intern and that was hard. So there are these hurdles. Then I met Heidi Barrett (Winemaker/owner of La Sirena, former winemaker for Screaming Eagle, Dalla Valle, Paradigm, Amuse Bouche, among others) and that was a big break for me, she needed an assistant. Then I started thinking about doing my own thing."

Wine Notes -
2012 Arcudi Napa Valley, Howell Mountain (Black Sears Vineyard) Cabernet Sauvignon - $150.00
Big blackberry jam, blackberry pie with a generosity of fruit, anise, and beautiful spice notes with some barrel influence, well balanced, very complex, and produced with restraint. Enough structure left over from this wine to build a naval submarine fully loaded. I would suggest this is highly age worthy. 14.5%
As I contemplated the age-ability of Arcudi's wine, I asked him, if he had one bottle left, when would he choose to open it? Arcudi didn't hesitate to say. "20 years."

A -
"There were several interviews. They decide who gets it. For once the good guy won. They picked me because they knew I was good to work with.
We have a long term contract and we are on the same page."

A -
"When you are in Napa, that is the best fruit. I am just going for the best fruit. Just like a chef, you have to get the best ingredients. When you get a vineyard like this, the wine makes itself. Cabernet is king there, and the choicest spots have Cabernet."

A -
"Bruno Giacosa. If he made cigarettes, I'd probably start smoking. To have that long of a career and hit the ball out of the park for so many years."
.

A -
"From day one, we seemed to be on the same page. It's been really great working together. I theorized how to make wine, and she confirmed a lot of it. I would watch and observe when she would pick, and press, and how long to leave on the skins. There's a lot of mentoring for sure. She is the master blender, and Arcudi is a 100% Cabernet."

A -
"Oh I think it's similar, sure! From the surface it's fairly simple winemaking. You make the best picking decision you can, the best pressing decision you can. After that it's aged in the barrel. The main thing is you do the best you can up front. You shouldn't be fixing things down the line. If you get that vineyard dialed in and the season works with you. Then you have really set yourself up for success."
"I don't know if there is a huge style difference, but its still two different people so it's going to be different. Maybe the wine is a little more grippy, she likes very fine tannins and this has fine tannins, so I think it's similar in style. Balanced wine, its not over oaked, it has acidity, so very similar style wise."
"One of the things I don't think people expect is the aromatics because it's a Cabernet."

Q - If you could only select one thing to pair with this wine, what would you pick?

Q - Where can your wine be found?

It was certainly a privledge to meet with Tony Arcudi, and taste his Napa Valley Howell Mountain Cabernet Sauvignon. Knowing I was one of his first interviews/tastings, has me wondering just how high and far the Arcudi pedigree will launch. If you enjoy being on a waiting list, don't do anything, but if you want to get in before the crowds, I suggest getting on his list.