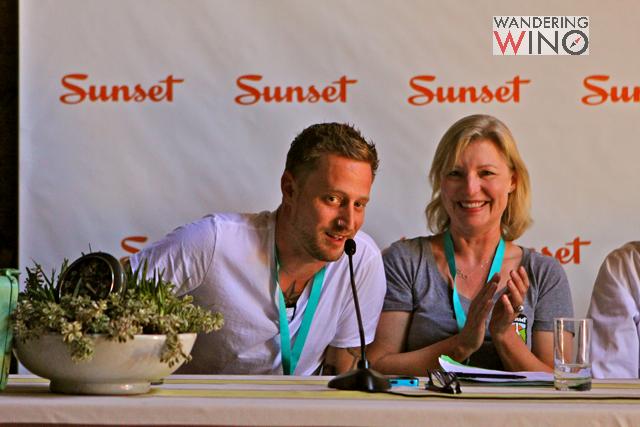 Chef Michael Voltaggio was one of the many celebrity chefs at Sunset Magazines' Savor the Central Coast. Savor CC for short, is an annual food, wine, and cooking event held in September at Santa Margarita Ranch in Paso Robles. (More event details)

It really is so much more, with four days of events, winemaker seminars, gardening demonstrations, live music, cooking demos from celebrity chefs, cookbook signings, and all loaded with wineries/breweries/restaurants from all over the central coast.

The best analogy just might be a real life experience from the pages of Sunset Magazine, or maybe just a Disneyland like experience for foodies and winos. Any event that provides a map at the entrance, and has a train circling the grounds, well, lets just say that's a pretty good sign of a very large and fun event.

It would be difficult to think of food and wine events in the region without mentioning Sunset's Savor the Central Coast. This year had several celebrity chefs, including 2009 Top Chef winner, Chef Michael Voltaggio. We had a chance to hear this popular chef and owner of LA restaurants Ink and Ink Sack at a press conference.

What ingredients most surprised you, or are you happy to see here on the central coast?

"The one ingredient that is indigenous to the region is abalone. The finger limes and advocates."

What is the inspiration behind your food?

(At a restaurant inside the Ritz Carlton, Naples FL) "Another Chef practicing French style in a restaurant right next to me and we shared a line. That caught my attention, so much that I wanted to know what he was doing. I went to the boss of food and beverage and said, I want to go work for that guy to be a line cook in his restaurant. He said that is crazy, why would you want to do that to yourself. Then I've gotten to work with guys like Thomas Keller Charlie Palmer, my brother, and chefs like Marcela. For me it is the opportunity to travel and go and see other things than just being at work all the time."

Are you familiar with the Central Coast?

"I have been known to come up here for dinner and turn around and go back to LA.  I don't have to go so far as Napa anymore to have a good experience, and I'm not even talking about the wine. I think tonight we are going to go restaurant hopping."

Does your childhood family dinner experience influence you?

"I think there are many families that don't force that 5 5:30 dinner table thing anymore and I think its important. Now that food, entertainment, and all that stuff is coming together, there is much more of an awareness of what's going on in the industry."

"There is much more of an awareness of what's going on with food. I sort of credit the media, TV, and that whole world for making food and making getting around food a priority because now it's cool to do it. As opposed to 5 years ago everyone's so busy it was just an inconvenience to have dinner together.That's where fast food got really popular and people were just eating because they physically needed to. Now it is back to the ritual of eating which is something I very much inspired by."

What did you take away from 2009 Top Chef? Memory?

"I was with my brother until the end."

"The number one take away for me, and it changed my focus in how I cook is In a competition, you have to play by the rules of the competition. You have to cook to a very specific demand or person. So for me it was  the number one thing I learned was, you are actually cooking for other people, and listen to the other people you are cooking for. I think chefs have a tendency to cook for themselves. What I learned was a process of sometimes it's actually better to cook for the people you are cooking for. So that is what we are doing in our restaurants now.

So listening to our guests if someone sends something back to the kitchen I used to say they don't know what they are talking about. Ask them what the last restaurant they ate at? And now when something comes back,  I eat it and it's actually disgusting, but I have to see if they are right, if I need to adjust what I am doing, and I need to go back in the kitchen to make sure I am sending stuff out right. People have different palates too. I think food is subjective and people have different opinions, so you should have a variety to offer people. Top chef has offered me the opportunity to go and listen to the dinners a bit more and cook for them. "

How have things changed for you since being on Top Chef?

"Getting back to cooking. Now it is more interesting to be a chef than it ever was. Stay as close to what got me there and it's being behind the stove. It is fun to go back and have a space in your own restaurant."

Can you talk about smoking and how that is becoming a trend?

"I think anytime you add any of that roasted, char, smoke, flavors I think for me is that people that don't eat meat crave.  90% is the ingredients you are working with, and that 10% is one where you can diffidently make an impact on flavor smoking, grilling, charing, to something like a strawberry that you wouldn't normally do for instance. It's going to taste different than if you didn't. We smoke in the restaurant right now, and we smoke carrots. It makes the experience different."

"I also think fermentation is something that is becoming pretty big right  now. The funny thing is that is is getting back to the basics. I was just in Copenhagen and listening to people talk about sustainability and the new food is us doing research on how the old food was made. Canning is becoming big, pickling, chartructary is something coming back and something done for centuries. I was in Mexico recently. I think we should start taking our lead from Mexico because they have blown right past what we are doing here because they are getting back to the basics. There is a goat in the backyard and where the cheese is made from."

This interview with Chef Voltaggio also included other celebrity chefs and was a drop in the barrel of the fun and education from Savor the Central Coast.