Written by shawn on date 17 August 2011 in Wine Festivals 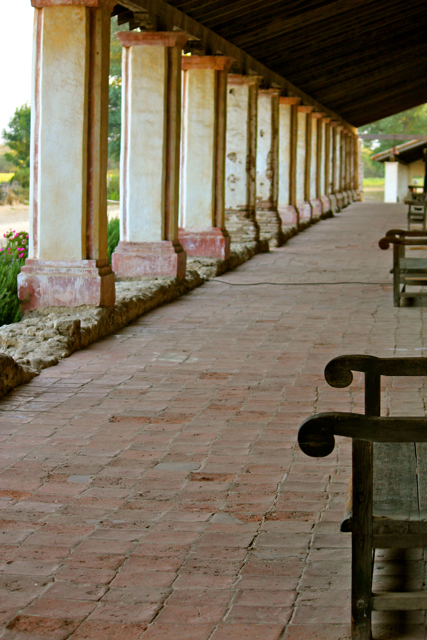 Wine and Fire was a fantastic celebration of 10 years of the Sta Rita Hills AVA and recognized a legend in the industry, Richard Sanford. It was 3 days of open houses, panel discussions, wine dinners, and several other special events with the grand tasting held at the La Purisima Mission in Lompoc, California. There was llive music, lots of BBQ including the Hitching Post banging out some amazing grilled sliders topped with grilled onions & mushrooms and seared ahi tacos with fresh salsa and slaw. Rooney's Irish Pub in Orcutt took their sweet time smoking whole pigs all day and spreading out pulled pork BBQ sandwiches. Chef Budi Kazali of the Ballard Inn created some amazing savory morsels that just topped it all off!

There was no shortage of very well respected winemakers in attendance many included in the mornings panel discussions. Richard Sanford of Alma Rosa, Bruno D'Alfonso of D'Alfonso Currans, Morgan Clendenen of Cold Heaven, Wes Hagen of Clos Pepe, RIchard Longoria of Longoria, Kathy Joseph of Fiddlehead, Ryan Carr of Carr, Dick Dore of Foxen,  Ken Brown of Ken Brown ,  and Ryan Zotovich of Zotovich just to mention a few.

With such a fantastic group of wines, it made it difficult to chose who's wine and which ones to select. Very similar to the way a child must feel in a toy store attempting to decide which aisle to run down. Upon entry of the event so many wine enthusiasts stopped off at the very worth wild first few tables, while I headed straight for the back. I stopped at the Alma Rosa table and Richard Sanford was there talking with a wine enthusiasts. I stopped to taste and had the honor of meeting the guy behind the guy behind the guy. He started making wines in Santa Barbara around 1970 and was the second winery in Santa Barbara county.I shook his hand and thanked him for all he has done for the industry and Santa Barbara. We talked about his different Pinot Noir's, and I got geeky with clone questions related to his Pinot Noir offerings. He shared some of the variations of his Pinots. When he picked up a bottle to pour me, it was like being a kid handed a gift from Santa Claus. One of the very few tables I drank the whole line-up, and loved every one of them! Great man and great wines!

I also had the pleasure of stopping and talking with several other wine makers and drinking many fantastic Pinot Noir's and a handful of Chardonnays, with a Dornfelder from Huber thrown somewhere in the middle. There were cool climate Syrah's too, but I had Pinot on the brain that day. It's special events like WIne & Fire that allow you to meet those that put in all the hard work to making our wines for us. This was my opportunity to ask some questions that I've wanted to know or just learn more about the winemakers that quietly sit at my dinner table so often represented by their bottles.

It's events like Wine & Fire that allowed me to learn about Liquid Farm; a new comer on the block producing only 4 barrels of 2009 Chardonnay. Their wines are currently produced by the Dragonette team sourcing fruit from Kessler-Haak, Rita's Crown, and Zotovich Family. They do not have a tasting room yet, but pour by appointment only. Very nice people and solid wine! This event had Sta Rita Hills producers who's tasting rooms ranged from the Santa Barbara urban trail AKA funk zone to as far North as Santa Maria (Foxen Canyon), to as far West as Lompoc AKA Lompoc Wine Ghetto, with Solvang right in the middle. Not a likely day of wine touring with such a vast driving range, but at Wine & Fire, I could make that stretch just by stepping to the next table.

Having the opportunity to spend the day at such a beautiful location, eat such great savory foods, meet legend status winemakers, and drink some of the worlds best wines, I can only count the days until next years event!